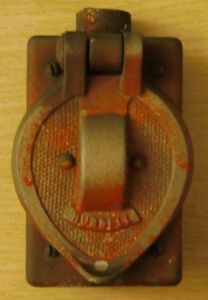 This is for those of us who grew up in Small Town America near one of those dreadful fire sirens parked on top of utility poles. The 4 sirens that were strategically placed around the quiet Western New York Village of Perry are now sitting in the four corners of the Perry Fire Department Museum at the Perry Village Park. This very switch came from the northeast corner of Lake and North Federal Streets – adjacent to the Vet’s Club.

The Beckary Homestead was approximately 50 yards from this switch & it’s noisy siren partner which inflicted a significant amount of trauma on us at all hours of the day or night with no notice when it would go off.

As my big brother Albert and I got a little older and a little taller we discovered THE SWITCH.  There were occasions when the entire system Village-wide stuck on – at which time one of the tall “Beckary Boys” gladly ran to the base of that damn siren and flipped the switch!  The Switch was about 8 feet off the ground – barely in reach for two six foot plus teenage boys. As the siren wound down from it’s horrible decibel level appreciation would come from many of our neighbors prompting a bow from Al or me.

In later years the four sirens were decommissioned and a louder, single, central siren was placed on top of the Fire Hall downtown.  Since that time I have always wanted to acquire that switch.  During a visit home in July 2011 I asked retired Police Chief Jurkowski who could grant me permission to get my prize. The Chief directed me to “Mr. Perry Fire Department” Mike Laraby.  After several attempts to catch Mike I found him meeting with the Village Maintenance Boss Ed Koziel & Village Admin Terry Murphy.  I knew all three of them from my early years in Perry.  After a quick discussion between these powers-to-be, permission was granted and Ed suggested I meet him at the Village maintenance building in 15 minutes!

The rest is history – literally.  The Switch has become a valuable treasure in my home as it is a very unique & special piece of Perry History.

This Blog is dedicated to those lifelong servants like Police Chief Gary and Firefighter Mike who protect Small Town America. Here we go!

Let’s consider this Ground Zero for this exercise.