Every Memorial Day the Perry High School Marching Band would don those heavy and hot wool uniforms and march from Olin Avenue – down from the High School football field/track – and move out onto Main Street… up to Gasoline Alley to Center Street and up Lake Street ending at the Vets Club where either Mr. Hughes or Mr. Bichalaney would play Taps as part of the Ceremony honoring our fallen war heroes.  Being the tall Sousaphone player I was often used to set one of the corners of the band – it was easy for the others to “mark off” on me since I couldn’t be missed!  My mom made the cover for the bell of my instrument in our Yellowjackets colors of Blue and Gold. 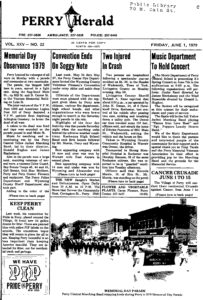 The most memorable year marching was when Merle Cowie – father of our dear friend and clarinet player Michelle Cowie – buzzed the band from the rear while we were marching down Main Street and playing.  Mr. Cowie was a Cropduster and kept his plane on the family farm property adjacent to the Perry-Warsaw Airport along Route 20A halfway between Perry and Warsaw (perhaps the airport could be renamed in Mr. Cowie’s honor).  He must have been just above the two- and three-story buildings along Main Street – somewhere along the northern stretch of downtown near the old Robeson Cutlery building.  I just remember how we were all suddenly shocked to the point of not being able to play or march!  We were all over the place as he simply scared the crap out of us!

Proximity to The Switch – at the end of the Parade and during the Ceremony – we were underneath it!

Duke was a major part of our family.  He was the friendliest, most faithful of friends and never talked back or argued with anyone.  He followed Al and me on our paper routes regardless of the weather so often he could have subbed for us!  One very cold winter day (weren’t they all cold!?), he waited outside a friend’s house for over two hours for me to come out and take him home.

Duke came to us from a neighbor where the couple was separating.  We could hear him bark when tethered to his chain and offered to have him sleep over one night. Soon after he was ours permanently. He was 2 then and stayed with us until his death at age 12.

He was mostly a Yellow Lab – but his curled tail showed that he was 1/4 Shepherd (who’s your daddy?). He was very gentle and great with kids. He did have a protective side and needed to be locked up prior to the daily visit from the mailman. Let me remind you that the mail was actually brought to the mailbox on our house by a mailman who, imagine this, walked. Duke liked to hide behind a large tree and pounce on the poor man. Mace was used on more than one occasion. When a Jehovahs Witness, Mormon, or other solicitor came to our front door we would put Duke on the front porch and let the visitor decide on whether they wanted to enter the porch.  They quickly went on to a neighboring house. Leave your Watchtower on the front steps.

Several ladies in the area would save steak bones for the next time Duke wandered by.  The Village did have a “Leash Law” that required all dogs to be… you guessed it…on a leash, chained up, or inside a fence.  Duke’s wonderful personality and the friendship between my dad and the Dog Catcher gave him a Stay out of the Pound card and saved us a bunch in fines.  In later years, after Al and I were off in the Air Force, the friendly Dog Catcher was no longer, and the local Police served in that role as needed.  Because Duke enjoyed car rides so well, the Policemen knew that they simply needed to open the car door and invite him to ride. That raised far too much revenue for the municipality and caused our family to make some adjustments in Duke’s freedom.

He was a gem – people in Perry still comment on how much they liked him. And for the record – he was never ‘fixed’. He would have considered it being ‘broken’ not ‘fixed’.

Duke’s regular proximity to The Switch – usually within 1/4 mile in any direction.

What did we do for entertainment in our Northern Town?  In the Summer we had plenty to do (wearing long black socks on a hot Summer day – for starters).  Here is one example.  Each year the County Sheriff’s and Village Police Departments sponsored a Bicycle Rodeo that included Bicycle safety education and an obstacle/handling course. 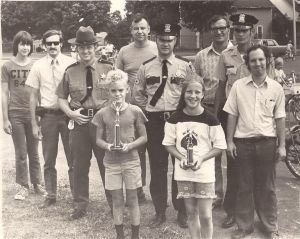 There is a great deal of activity going one here.  According to Joanne Hughes, winner of the Girl’s category, was the overall winner – I am SO grateful for a Boy’s category otherwise I would have been defeated, crushed and permanently scarred.

There are lots of kids riding around… my favorite part is the Plymouth in the back left of the photo.  If you look closely you’ll notice an outstretched arm.  Is he waiving or sharing a one-finger salute?  For those of us that knew this character – we’d vote for the salute.

The Patrolman in the center is now a Retired Police Chief – after 35 plus years of service (correct me here, Tami!) and the father of the girl riding on the right [whom I chased during our high school years but never quite caught!].  During my last visit to town he and I had a great visit.  When I asked him to share his “funniest” story after all those years of service his answer surprised me…  not sure if I can share that one and photos are not available – I hope!

Proximity to The Switch -1/2 mile to the Northeast.